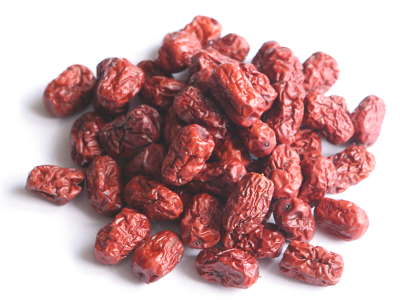 Red jujube (Ziziphus jujuba) belongs to the buckthorn family (Rhammaceae) and its fruit is a drupe big as the smaller date. Herbal teas usually do not use sugar, but a sweet herbs that fits into her tea. It is often used licorice and anise, but the jujube is the right sweetening supplement to the ginseng decoction. Jujube is a part of the herbal mixtures of TČM.

The fruits of the jujube are as tasty as the real dates, but they contain less sugar. They have a glycemic index GI = 103. They also remind true dates by growing well in dry areas. In China, the jujube is called the "red dangle" ( hong-cao ) to distinguish it from the "black date" ( chei-cao , other raw material). To distinguish from taxonomically unrelated real dates (true dactylon , Phoenix dactylifera ), jujube is called "Chinese date" in English.

The European Council and Parliament Regulation No 1924/2006 from December 20, 2006, expressly prohibits the sellers of food and food supplements (where most adaptogens belong) from making so-called "health claim", except those approved directly by the European Commission or the European Food Safety Authority. For this reason, we may not inform you about the effects of red jujube and other adaptogens and you will have to find the information about them directly in the literature or on the Internet.

How to consume Jujube

Red jujube is, together with goji one of the traditional ingredients of strong ginseng decoction. For ginseng tea, red jujube is the most natural sweetener. Before cooking, it is best to make several lengthwise cuts in the skin of jujube – it will steep faster. Red jujube is of mild, pleasant, and has little subjectively perceptible effects, except those seen in dried plums. Red jujube is interesting in that its leaves contain peptide, that temporarily blocks perception of sweet taste.