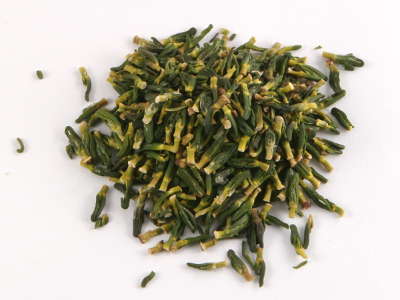 In both Chinese and Indian traditional herbs, the lotus is considered one of the most valuable plants. All parts are edible, but the most important is lotus seed (lotus) and lotus underground.

Lotus seed ( nelumbinis seed ) is large (about 1cm), white and contains a bitter embryo (lotus sprout). By removing the bitter germs a lotus hazel is created. Lotus nut with its high protein and fat content resembles legumes (soybean, chickpeas, lentils), which, however, surpasses the delicate flavor and consumption even in a raw state. The specificity of lotus seeds is their longevity. They germinate at the earliest after several decades and have germinated for more than 200 years.

The rhizoma nelumbinis is the underground (ie mud-growing) tuber of this aquatic plant. It resembles sweet potatoes (sweet potatoes) but has a lower starch content and higher fiber content and specific lotus phytoplexes. It also differs from bathets by containing air cavities that can float in the mud and facilitate breathing. On the transverse section of the tuber, these cavities are seen as holes arranged in a characteristic ring pattern. Lotus flour is prepared from lotus tubers, which is used instead of potato flour.

The lotus germ ( plumula nelumbinis ) is part of the seed (embryo). It has a very bitter taste and is separated during processing. In spite of the bitter taste, the lotus embryo is completely inedible and can be used for culinary purposes, for example, in bitter liqueurs and tonics. It contains bitter alkaloids, lotusin, nuciferin, pronuciferin, liensinin and neferin. Lotus sprouts are completely non-toxic.

Also other parts of the lotus (leaves, stems, flowers and fruit target) are edible. Flowers are interesting by acting as a natural insect hotel. They are heated (the lotus is one of the few plants capable of producing heat) and they attract insects to rest during the night. They will be closed at the morning, and the hotel guests will be trapped until the next evening, giving the lotus the perfect pollination. We do not have to talk about the medical use of the lotus, because according to Regulation 1924/2006 of the European Parliament and the Council, so-called " health claims " are not allowed. Learn about the effects of this amazing crop.

How to consume lotus

Individual parts of the lotus plant have their specific use in TČM. Boiled lotus roots are used as healthy vegetables and are popular especially in vegetarian restaurants. In countries where the lotus is grown, the devil is used in large quantities. In other parts of the world, lotus hazel , which can be consumed in a raw state, enjoys more popularity, but it is more tasty when it is prepared for the way of legumes - let it swell and then cook until it is completely soft. It has a delicate flavor and fits well into fleshy dishes and light desserts. The bitter lotus sprout can be used in the liqueurs due to its content substances.